It’s very difficult to give an answer when asked what my favourite language is. It seems cruel to have to pick one, given the endless beauty and idiosyncrasies of each language…or dialect…or sub-dialect. However, my answer is usually Irish because there is one, clear reason I can readily cite for the inevitable follow-up of “Why?”: the imagery.

Every language uses visuals in descriptive expressions, often in ways that are completely unique. The image of raining cats and dogs is unlikely to turn up in any other language; it is truly an English notion. However there is something about the imagery in Irish that strikes me as particularly special, especially when it comes to describing the natural world.

I must admit that I am motivated by some level of cultural bias, as the names of plants, animals, and herbs abound with vivid imagery referencing perhaps more than a thousand years of folklore, mythology, and oral traditions to which I am personally connected. However, I think that anyone will appreciate this aspect of the Irish language, and perhaps gain some insight into how inseparable the landscape and natural environment is from the Irish culture, language, and psyche.

Below is a collection of some of my favourite nature-related words in Irish and some explanation, where possible, of the origins of these terms.

Let’s start by explaining the title of this post a bit. Smugairle róin is the Irish word for jellyfish. Smugairle literally means “spit” or “snot”, and róin is “of a seal”, hence “seal snot”. I love the image of seals joyfully gliding through the water, hocking loogies and spawning slimy, transparent creatures off the coast of Donegal. It’s absurd and gross and beautiful all at the same time.

Daffodils in Irish are called “Herb of the Bowed Head”. Lus is herb and chromchinn comes from crom, “bowed” or “bent”, and ceann or “head”. The name obviously describes the posture of the flower gracefully bowing its head. There is another, much less graceful name for Daffodils, though, and that is Lus an Aisig, more or less “vomit herb” in English. This comes from the fact that daffodils are highly toxic, vomiting being one possible result of a human or an animal accidentally ingesting them. A friend of mine suggested that the second, more graphic name might also be in reference to the posture of someone bending over to vomit, though I think most will prefer the more demure, poised “bowed head”.

Foxglove, itself a beautiful and fitting plant name in English, has a few versions in Irish, two of which relate to the banshee. The first is simply Lus na mBan Sí, “Banshee Herb”. The other, more in the line of “Foxglove”, is Méaracáin na mBan Sí, meaning “Thimbles of the Banshee”. The purple, thimble-sized flowers are the most obvious feature of this plant, and the reference to the banshee may be a warning of the potentially toxic nature of this plant. It seems that an inordinate amount of plants whose Irish names reference the fairies, banshees or other spirits from the Irish pantheon are poisonous. The fairy folk, or an t-Aos Sí, are powerful and not to be toyed with. So are their plants.

This link between poisons and the fairy world can be seen as well in Caipíní Púca, the Irish name for a kind of psychedelic mushroom, meaning “Little Goblin Caps/Hats”. Ingesting these will certainly bring on aisling-like visions and possibly access to na daoine maithe, “the Good People”.

Irish sometimes has a curious way of using mac (son) in creating words. The word for wolf is mac tíre (son of the country/countryside). Some have thought that this is in reference to old beliefs about the shapeshifting abilities of wolves, who are encountered in human form in many tales.

Another curious usage of mac can be found in the word macalla (echo).  This word comes from mac (son) and aille (of the cliff). Thus an echo is the son of a cliff, i.e. a sound being reproduced off of the side of a cliff. 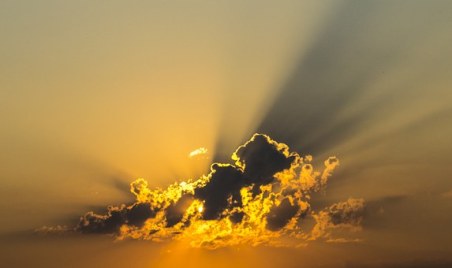 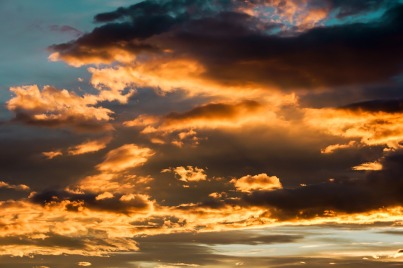 Cumulus clouds in the sky are referred to as “castles” in Irish. Large and imposing, they tower high like castles of ancient lore, clouds and castles incidentally both being fairly common in Ireland. Taking the image one step further, the golden-orange-pink vision of clouds in the sunset is known as caisleáin óir – castles of gold.

Finally, one of my favourites, is actually not a native plant to Ireland. Fuchsia is the result of planted hedges that outgrew their intended confines and is now commonly seen g

rowing wild particularly in the southwest of Ireland. Because of this, there is not any old folklore to be found regarding the plant, yet it has still managed to acquire a very beautiful Irish name: Deora Dé (God’s Tears).

The drooping flowers and stamina are the most graceful of tears, and their electric colour is perhaps their godly quality. I haven’t been able to find information on the origin of the name Deora Dé, but it isn’t surprising to me that the flower found such a striking name in Irish.

The above is just a smattering of the imagery that Irish has to offer. The language casts vivid scenes and stacks layer upon layer of meaning, often onto some of the most simple or common objects or ideas.  This is what I miss when I don’t get to speak Irish for an extended period of time. These types of words are the real heart of the language. So the next time someone corners me into answering why Irish is my “favourite” language, I’ll simply reply, “Seal snot and God’s tears.”

Timothy McKeon is a translator, polyglot, and doctor of Traditional Chinese Medicine living in Berlin.

© Timothy McKeon and Collectanea Linguistica, 2015-2017. Unauthorized use and/or duplication of this material without express and written permission from this site’s author and/or owner is strictly prohibited.