Lately on social media there has been a lot of talk about learning Arabic.  The fact that World Arabic Language Day just passed certainly contributes to that, but it has been a frequent topic of discussion for a while now.  “Top ten”-style lists abound, extolling the reasons why Arabic is the language you should be learning.  It has close to 300 million native speakers, it is an official language in 25 different countries, it opens up many lucrative job opportunities, etc.  These are the typical reasons we’re given as motivation to learn a language.  The media likes to identify the “next big language” or the “language of the future” every now and then, and typically this has more to do with economics and business than anything else.  You won’t find articles encouraging the study of Telugu or Javanese (though they each have close to 100 million native speakers) because they just don’t carry financial incentives.  We’ve seen it with Spanish and Chinese as well – different languages, same rhetoric.  Speakers of large languages are seen as untapped markets, or worse, sources of cheap labour, that become more accessible when you learn to speak their language.  Notions of learning about a new culture, connecting with people, and expanding your worldview are all too often glossed over.  What matters at the end of the day is the money.

Though this type of thinking does a great injustice to the value of languages in general, I feel that it falls extremely short of conveying the importance of learning Arabic, particularly in our world today.

In the U.S., particularly in the past month since the Paris attacks, anti-Muslim and anti-Arab rhetoric and acts are on the rise.  In November, two men were temporarily stopped from boarding a flight from Chicago to Philadelphia because they were speaking Arabic, and it made another passenger “uncomfortable”.  A self-defense class for Muslim women is started in New York after increasing reports of harassment targeting women wearing hijabs.  Irving Texas has seen the arrest of 9th grader Ahmed Mohamed for making a homemade clock that was assumed to be a bomb, as well as an armed protest outside a local mosque, staged by people who are against the purported “Islamization of America”.

An article from a right wing news website states that Arabic is the fastest growing language in the U.S., citing a 29% increase between 2010 and 2014.  The article warns of the high percentages of people in the U.S. that speak a language other than English at home.  These numbers are seen as a threat to the English language itself, which is referred to in the article as the “glue that holds our country together”.  This rhetoric feeds the myth of the “Islamization of America”, when in reality this 29% increase only brings the number of Arabic speakers in the U.S. up to about 860,000, or roughly .003% of the population.  Not exactly a large enough sector to warrant fear on a national level.  Nevertheless, anti-Muslim sentiment in the country grows.  A school district was shut down due to threats it received after a homework assignment featured Arabic calligraphy.  People are scared of what this language supposedly represents, and despite the fact that many Arabic speakers are not Muslim and many Muslims do not speak Arabic,  the Arabic language is perceived as a part of that so-called “threat” of Islam.

With hate speech and fear-based Trumpisms flying around at an alarming rate, it seems to me that the biggest reason to learn Arabic nowadays, is the need to support communities of Arabic speakers.  Polyglot and language learner communities are uniquely equipped to help turn the tide of intolerance through their study and use of different languages (emphasis on the “use”).  People tend to fear the unknown, but our skills enable us to help shed light on the Arabic language, and by proxy the people that speak it.  One of the “reasons to learn Arabic” lists I came across puts it very clearly:

“By studying Arabic and learning about the culture, you will gain a deeper and more nuanced perspective of the Arabic-speaking world than the typical themes found in U.S. mass media. As you share a more balanced perspective with your family, friends, and peers, you will encourage a greater understanding of Arab culture in U.S. society and more trusting attitudes towards Arab Americans and Arabs living in the U.S.”  (American Councils for International Education, Seven reasons why now is the time to learn Arabic )

In Israel this sentiment has recently been put towards a law mandating the study of Arabic in Jewish schools, starting in the first grade.  The idea is that language serves as a vehicle towards cultural understanding and the humanization of the “other”.

It’s also important to keep in mind that when practicing your new language skills with Arabic speakers, you’re giving direct support to the language community.  You’re allowing the other person to feel pride in their language and identity.  You begin to chip away at the dynamic that keeps those who are marginalized from freely and safely displaying their culture, speaking their language, or just being themselves.

Needless to say, I have already jumped on the bandwagon and begun to learn Arabic as well.  It’s one of the “big languages”, so it was only a matter of time before I got around to studying it, but now it’s also a matter of urgency and importance.

The first decision every student of Arabic will encounter is whether to study Modern Standard Arabic (MSA), the literary language based on the language of the Qur’an, or one of the many regional dialects of Arabic.  Benny Lewis has a good article hashing out this question on Fluent in 3 Months, so I won’t delve into the pros and cons here.  In the end I’ve decided to lean heavily towards dialects and just periodically check in with MSA as I progress.  I’m mainly using audio materials, as the regional dialects are not generally written, and am focusing on Levantine Arabic (because of the political situations in the region) and Egyptian Arabic (because of the vast amount of media available in this dialect).  At this early stage, there isn’t much confusion between the two dialects, but I imagine there might be as I progress, at which point I’ll just pick one dialect to focus on. 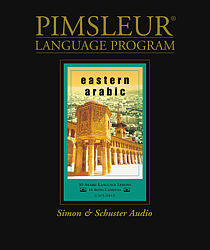 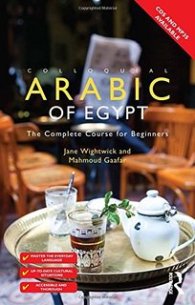 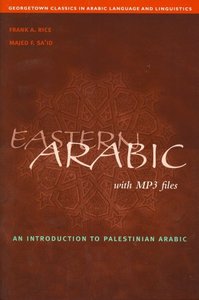 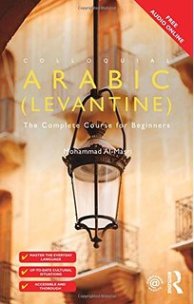 As for Modern Standard Arabic, I decided I would get some very simple workbooks to start to get the basics of the written language.  I have used modified versions of the Arabic alphabet in studying Urdu and Uyghur, but it’s my first time seeing how the writing system functions in the original language (but that’s a whole other article unto itself).  So with Syrian Arabic dialogues playing in my headphones, I walked over to a section of Atlantic Avenue in Boerum Hill, Brooklyn, where there are a couple of Arabic language bookstores.

Maktaba Dar-Us-Salam has a great selection of beginner level books for MSA – I picked up a reader and a few workbooks.  Though I was eager to try speaking Arabic in the store, I actually just ended up practicing Urdu.  I think this brings up an important point though.  Arabic speakers are not the only ones feeling the brunt of anti-Muslim sentiment in the U.S.  Learning Bengali or Farsi or Urdu can make just as much of a statement.  The key question is what signal do your linguistic pursuits send out to the world around you?

As I left the bookstore I was stopped by a reporter who asked me if I was buying books on Islam and if I was Muslim.  She said she was interviewing people to find out about any anti-Muslim behaviour experienced in the wake of the Paris attacks.  It was a nice reminder of my original motivation for coming to this store.  It’s easy to get caught up in the excitement of glossy new books and beautiful scripts, but it’s essential to remember that the extremely rewarding study of languages can have far-reaching positive effects with the right intention and practice.  If you are a student of Arabic, or if you decide to become one, I hope that you will keep this in mind.

2 thoughts on “the importance of learning Arabic”

Timothy McKeon is a translator, polyglot, and doctor of Traditional Chinese Medicine living in Berlin.

© Timothy McKeon and Collectanea Linguistica, 2015-2017. Unauthorized use and/or duplication of this material without express and written permission from this site’s author and/or owner is strictly prohibited.